In 1936 Robert E. Knox started R.E. Knox Rag Laundry. Mr. Knox believed there was a profit potential in collecting dirty rags from manufacturing companies. He cleaned them, and sold them back to the companies that he collected them from. R.E. Knox Rag Laundry quickly obtained a reputation of providing quality products, quality service, at a fair price.

In 1948 Mr. Knox saw potential in expanding his services. He changed the name to Knox Rental Service and began to offer uniform, towel, apron, sheet, and pillow case rental. Robert and his wife Phyllis had four kids, three boys and one girl. All the kids helped throughout their childhood but the three boys found a special interest in the business. Operating in Bryan Ohio in 1964 Mr. Knox and his sons started renting walk off mats.

In 1968 Knox Rental moved to Edgerton Ohio where they operated from home. In 1980 Robert E. Knox handed over the company to his son Bob Knox. Mr. Knoxs other two sons, Greg and Milo Knox became vice-presidents. In the same year, Knox Textiles purchased their building that they are still at today on Berment St. in Edgerton Ohio. Today Knox Textiles is a full service rental business. They operate in Edgerton Ohio, where they still believe in the same core principles that Mr. Knox started with 74 years ago. 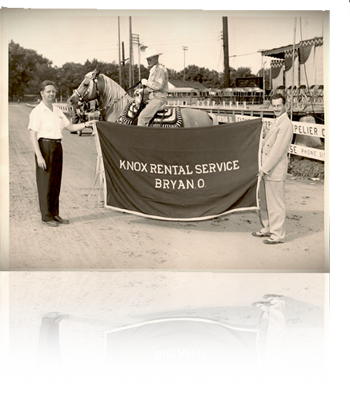